Roommates, after he publicly pleaded with Mark Zuckerberg and even offered him $100,000—Boosie revealed in a new interview that now he plans to sue Zuckerberg for $20 million for shutting his Instagram down. For the last few months, Boosie has been in a tug-of-war with Zuckerberg in the hopes of regaining his Instagram, but it appears that now he wants to go the legal route.

During a recent interview, Boosie boldly proclaimed that he has decided to officially sue Mark Zuckerberg, in his latest attempt to lift his current Instagram ban. He claims that by deactivating his Instagram account, he has taken a major financial hit to his various business ventures, as IG is a hefty source of income for him. “[Zuckerberg] made some of my business ventures go down, so I’m suing him now. I’m filing a lawsuit against him now… he stopped me off Instagram and he didn’t put me back on Instagram. And that’s affecting my business.”

Boosie also alleges that his Instagram was banned because he was targeted due to his race, taking time to point out that there were many others with “worse” violations that didn’t result in them being permanently deactivated.

“This is the first time my Instagram has ever been [taken] from me,” he said. “So you can give other 2 million people their Instagram back for derogatory things they did? … This is discrimination. Something is wrong. Somebody must be mad ’cause I said their name wrong and they’re trying to chastise me.”

“And my Black people are starting to tell me, ‘Boosie, this man is a racist. He knows you affect the Black community and make them smile every morning? Why is he not giving you your page back? … He might be trying to stop us from smiling’ … You’re going too far.” 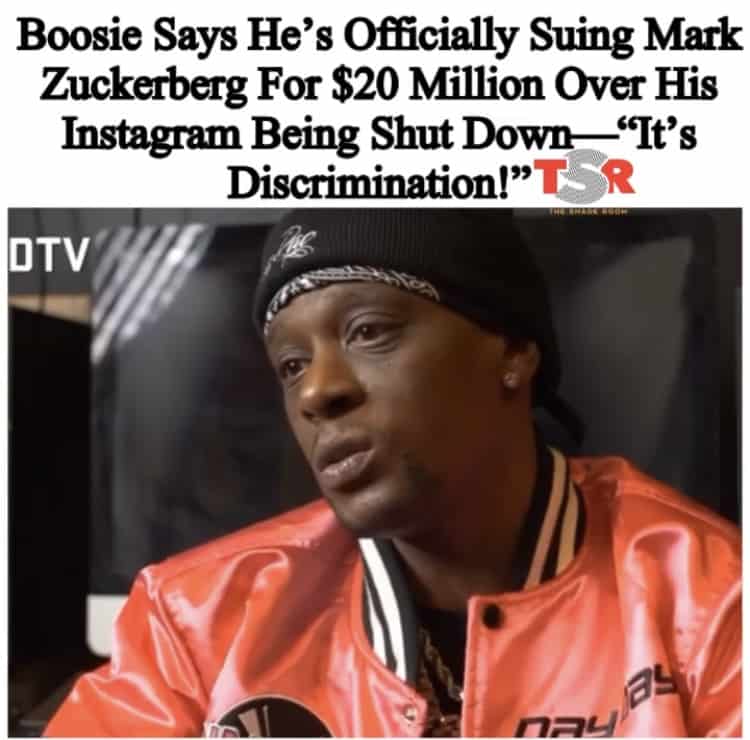