Roommates, looks like Celina Powell aka ‘The Black Widow’ strikes again, and this time with one of the members of Pretty Ricky!

Celina popped up at the Millennium Tour sitting pretty in front row seats and later that day she posted videos of her and Slick ‘Em in bed together.

If you’re not familiar with Celina, she’s notoriously known for her association with male celebrities and putting them on blast when things go south. I mean, you don’t get called the black widow for nothing!  Some of the men she’s reportedly been linked with in the past are Soulja Boy, Snoop Dogg, Tekashi 69, Offset and as of recently Slick ‘Em from Pretty Ricky!

Before we get into that tea, the last time Celina made headlines was after she alleged she was carrying Offset’s child. An allegation he denied from the very beginning. Once her “due date” came and went, she took to Instagram to admit she was lying the entire time about potentially being pregnant by Offset.

Very few people were surprised, and chalked it up to Celina being Celina. Since then, she was briefly seen with Love & Hip-Hop star Solo Lucci, but seems like that is done and over with. Celina got on Instagram and let the world know her and Slick ‘Em are an item (for now):

Looks like the #BlackWidow claimed her next victim and he ain’t denying it either ???? #CelinaPowell #SlickEm

This isn’t a one-sided affair either y’all, Slick ‘Em also seems to be feeling Celina, he posted a picture of her and said that was his wifey! 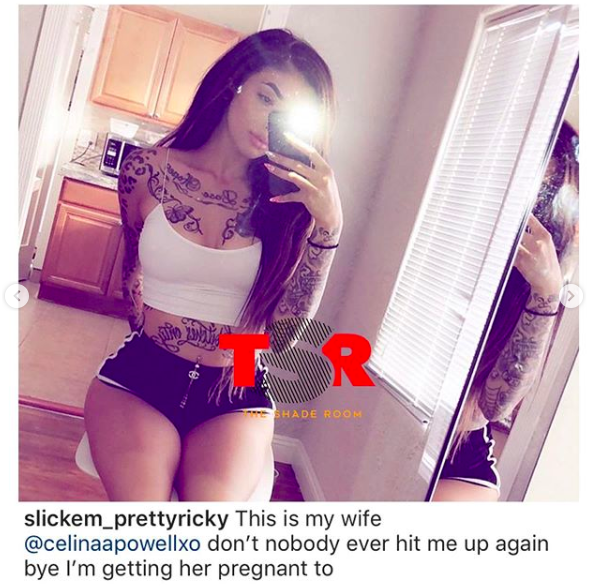 Plenty of people had something to say of the new couple, one of them being Masika, former star of Love & Hip-hop Hollywood! But Celina made sure to clap back with a quickness!

Masika has yet to respond to Celina, but The Black Widow may have gotten the best of her on this one. We’ll keep you guys up to date on this new budding romance Roommates!

Chloe Bailey Claps Back At Those Criticizing Her Music—“You Can’t Please Everybody, Do What Makes You Happy”

Tina Lawson Shares How Proud She Is Of Beyoncé After She Earns Her Seventh No. 1 Album

Irv Gotti Responds To Fat Joe’s Comments: “He Fooled Me, He’s Not My Friend”