(Exclusive) Travis Porter Details Adidas Never Cutting Them A Check Despite Their Influence: “We Had Everyone In Atlanta In Adidas”
Celebs

(Exclusive) Travis Porter Details Adidas Never Cutting Them A Check Despite Their Influence: “We Had Everyone In Atlanta In Adidas”

For those of you who rocked with Travis Porter in 2010 when they signed to Jive Records, you may remember this three-man band was often mistaken for one person.

I was today year old when I realized that Travis Porter was a group and not just one person. I know…… I know…. pic.twitter.com/R52UX6ZAjJ

Most known for their hit songs ‘Bring It Back’, ‘Ayy Ladies’ and ‘Make It Rain’, this group made a name for themselves through these club anthems and hood classics. The group consists of stepbrothers Ali & Quez, and their longtime friend Strap who they met in school.

Recently, Travis Porter stepped into The Shade Room backstage at the Millennium Tour in Dallas, Texas with interviewer, Taylor Bickham, to get some things off their chest. Everything you can think of was discussed: the origin of their name, their thoughts on not getting the flowers they deserved, their relationship with Adidas, which artist helped expose them to a different market of fans, the Millennium Tour and more!

Interviewer: How yall been?

Interviewer: A lot of people want to know why Travis Porter is a singular name and y’all are a three-person band?

Interviewer: A lot of folks refer to y’all as the “Original Migos” how y’all feel about that?

Strap: I would just say we the original three-man rap group. Of course they gone always compare the next people that come after but we got our own lane, and we always stayed in our own lane

Who remember Travis Porter they were like the original Migos lol

Interviewer: So, y’all are saying you all go outside of the box?

Interviewer: Have y’all ever broken up?

Quez: As a group we did. It wasn’t like…
Strap: It wasn’t like that
Quez: Them n—- wasn’t f—– with me. It wasn’t no sh– like that. We all was just like “okay cool”. Let’s just pause.
Strap: We were just living life
Quez: It was like… if we can’t get to the studio. Why we still talking about the studio? We got newborn kids. You know sh– like that. So it’s kind of hard for active parents to get in the studio. Strap: All the time
Quez: To make it worthwhile. Because the way we make music is like day in and day out, not like clocking in and clocking out. We might sleep in this motherf—-. But you know, baby mama might got a problem with that two nights in a row. Asking where the f— you been?

Interviewer: With y’all taking that pause in music, do y’all regret it?

Quez: I don’t think we regret it. I feel like this is even the fun part about everything. This was the most fun part about us even being in the rap industry. The grind to get to the next level. This is fun. I feel like a challenge is always good and for things to not just be easy as hell. Even though we get love everywhere, the love is still there. But, it’s just where people see you at in their minds. I feel like this is the best time for us. We love grinding. We love being on the road. We love putting out music. We love the ridicule and when people say “that ain’t it” so we can go harder.
Strap: We good with constructive criticism.

Interviewer: It seems like on social media a lot of people are not clear on your song ‘A.D.I.D.A.S.’ Is it about the brand Adidas or is it the acronym “All Day I Dream About Sex”, like it says in the song?

Strap: I thought we played it both ways. We did it both ways
Quez: Yeah, double entendre
Strap: Shoutout to the producer who made it. It was such a good production. That’s like one of our fan favorite songs.
Quez: I was telling her [interviewer] that. At the time we were shifting the culture in Atlanta. So, we had everyone in Adidas, but Adidas never cut us a check.
Strap: They showed love.
Quez: They gave us free clothes
Strap: But, everybody give us free sh—
Quez: But, guess what though? After that, in 2014, that’s when Adidas started signing rappers. That’s when I was like, “hold on.”
Strap: We were before the wave
Quez: They did Big Sean and a couple more other n—–s and we were like, “bro… hold on man.” We started it in the “A” and they looked over Travis Porter. Like always, you know how that go.

y'all act like travis porter didn't have a whole song bout adidas. mf was rocking the shell toes like a mf. KOBE was wearing adidas.

Interviewer: How do y’all feel about Adidas dropping their partnership with Kanye West?

Quez: They dropped it?
Ali: Man, I don’t like it.
Quez: I don’t like it either. I feel like people should be able to separate the art from the person. I can do it.

Interviewer: In all aspects? Even in situations like, R. Kelly?

Quez: Definitely listening to R. Kelly at the crib. I’m playing R. Kelly in the car. I can tell the difference between artist and the music. I can differentiate the two.
Ali: You can’t drop someone who brought you back to life.
Quez: If they was f—– with him, they need to keep f—— with him. Y’all ain’t f—— with him because of his personal views? But, y’all was already f—— with him. So, y’all just didn’t know this about him or something? Are the sales dropping? I don’t know. I just feel like they are tripping.

Travis Porter Talks About Not Getting Their Flowers

Interviewer: Do you guys feel like you get the flowers you deserve?

Strap: It’s really a stiff a– no.
Quez: Heisman Trophy stiff
Strap: But at the same time, a lot of people ain’t get their flowers. It don’t just start and end with Travis Porter. It’s a lot of n—- that don’t get their flowers, and they them n—- type sh—. I don’t want to be like yeah we don’t get our flowers when it’s other n—– who have done more than what we did
Quez: And, they haven’t got their flowers
Strap: So we ain’t gone cry about it. We gone keep going harder.

Interviewer: Do you have any songs that you feel like didn’t get the credit it deserved?

Ali: Nah. I feel like the songs that didn’t get as much love people still listen to ‘til this day.

Interviewer: I feel like “Cake” didn’t get the recognition it deserved.

Quez: You right, but it did though because when we perform it everybody know it. But, that’s like our career. That’s like Travis Porter career. It’s like they know it but it’s like have we heard it? It’s like we know them n——. We love them n——-. But, where they at? That’s how that song is. It’s like it’s there. Everybody know it. But, it didn’t get as much love as “Make It Rain” or “Bring It Back” but it was a hood classic. Some of the sh— just don’t go like that. Like, I could name 100 Boosie songs that nobody ever heard of but they are a classic to me.

Interviewer: Yeah, how does it make you feel that people still rock with y’all like there was no pause?

Ali: I mean.. I know I still got it. I know I’m him.
Quez: That comes with a solid foundation, like Strap said, how we were brought up and how we started.
Ali: We are a people person.
Quez: We will leave the section and go to the bar. Even if we got a show and only 300-500 people pull up, we going to the bar and get shots for everybody. It ain’t too many people where we can’t show everybody love.
Strap: I feel like the way we show our fans love we make them feel like they know us more so they appreciate it. They appreciate the music and it always take you back to where you were at. We got memories together. Simple as that.
Ali: And our music crossed over, and I gotta give that to Mac Miller for putting us on his tour. It crossed us over to a whole nother world
Quez: He put us in a whole different realm when it came to the music and that’s when we dropped ‘Reup’. That’s one of them songs. It was a sleeper but his fans are the ones that took that and ran with it. You know what I’m saying? Shoutout to Mac Miller. Rest in peace to the homie.

Interviewer: Who asked y’all to join the Millennium Tour?

Interviewer: What was that like? How did he ask y’all?

Quez: Sh—, Facetime. He was like, “Bro. What you doing? What y’all tryna do?” I was like, “What the money looking like?” And, shoutout to our homie, Bart, he was pushing for us to be on this tour, too. He’s one of our homies from Atlanta.

Interviewer: What does being on this tour mean to y’all and your contribution to the culture?

Ali: It feels good. You kind of forget because you ain’t performed in a big crowd like that in a long time, and it’s just like damn we really them. That’s how it feels every time we get on the stage.
Quez: Yeah, that’s facts. And, we came out after everybody on this tour, and I feel like we a good addition to what’s going on. And, we got the best show. We got the best set. 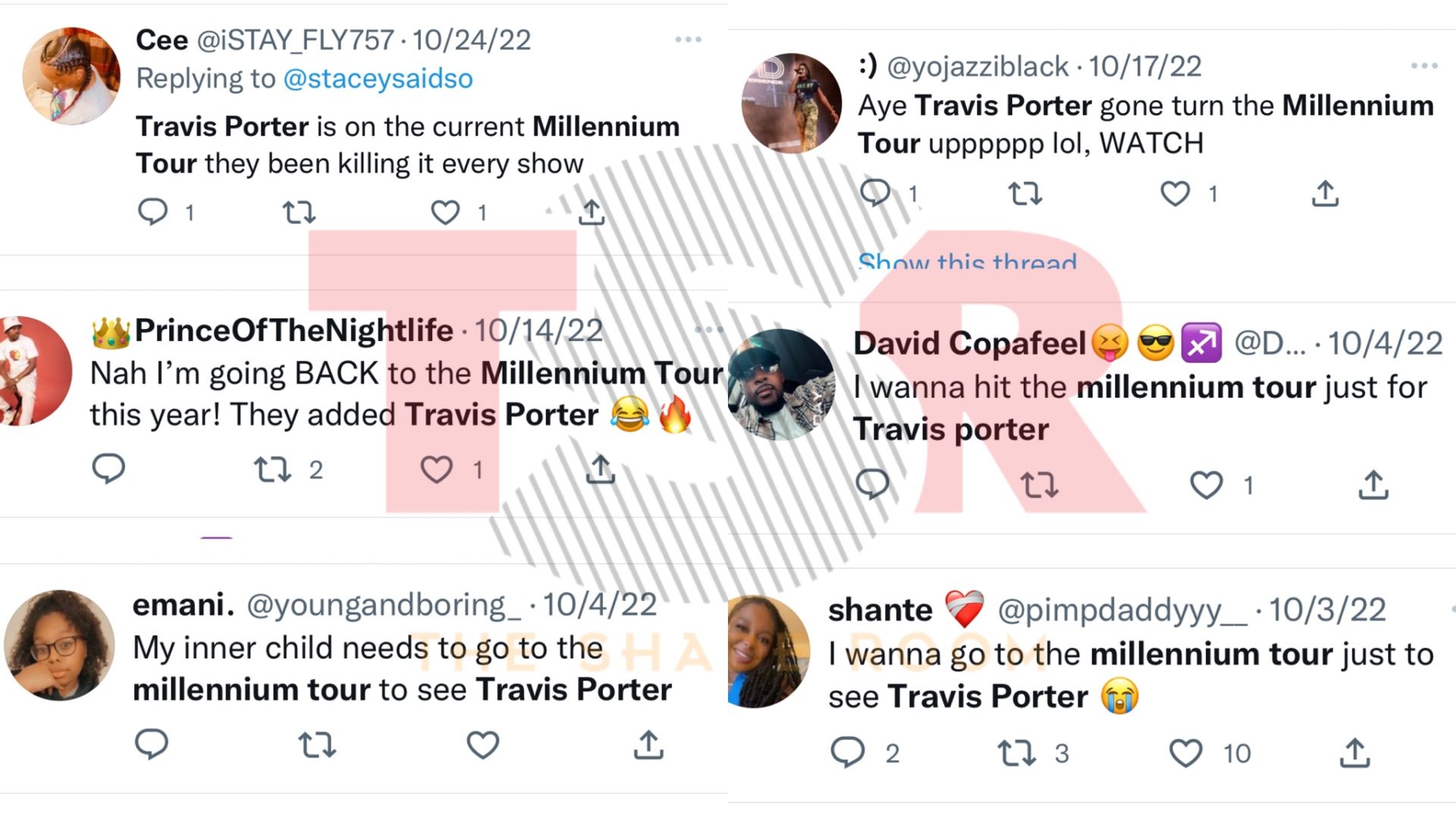 Interviewer: On this tour, who do y’all feel like you were fans of?

Quez: Pleasure P
Ali: Yeah, I’d say the same thing
Strap: Me too
Ali: That ‘Did You Wrong’ got my girl back five times
Quez: Like literally, I lost my virginity to a Pleasure P song. So, that’s why I resonate

Strap: That was 90% Cassamigos answering for me. Lol.

It’s clear that Travis Porter truly appreciates the love they’ve been receiving during the Millennium Tour, and fans are here for the nostalgia their music brings.

Roommates, what Travis Porter song is your fave?

In Her Groove! Patti LaBelle Says She’s Open To Dating At 78: ‘I’m Too Good To Be Solo’

Juan Dixon’s Alleged Mistress Speaks Out, Says His Relationship With Robyn Is Just ‘For TV’

We Love To See It! Flo Rida To Donate Much Of His $82M Settlement To Charitable Causes

Jonathan Majors Says He Talks ‘Girl Troubles’ With Michael B. Jordan: ‘We Support Each Other’

Lyfe Jennings Robbed Of $120K In Jewelry, Says He ‘Respects The Position’ The Thieves Were In