Flavor Flav Reportedly Owes The IRS $3.1 Million After Not Paying Taxes For 10 Years

Roommates, #PublicEnemy rapper #FlavorFlav is reportedly in hot water with the IRS! According to legal documents obtained by BOSSIP, he has slipped out on paying taxes for the past ten years and now owes $3.1 million!

Flav, whose real name is William Drayton, was slapped with a federal tax lien for unpaid taxes dating from 2005 through 2015 and owes a total of $3,185,860.18. Almost half of this debt was accrued back in 2007 while he filmed #FlavorOfLove.

If Flav doesn’t start making payments, the government will start seizing his assets including a home he owns in Las Vegas.

Chile, he better call Tiffany Pollard and ask her for some of that “Celebrity Big Brother” money! 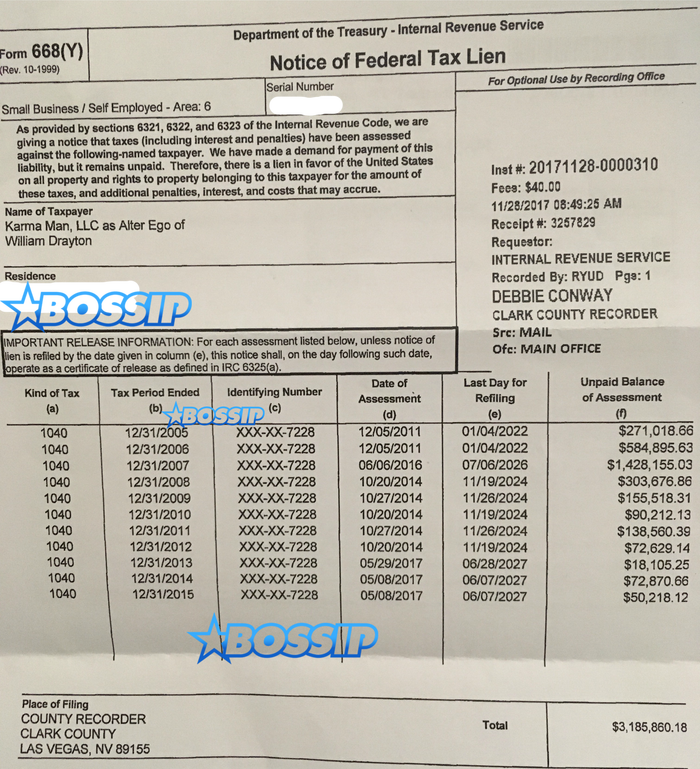 Tabria Majors Wins Halloween With Tribute To Beyonce! [Video Inside]

Family Of Zekee Rayford Speaks Out Following Viral Video Of Him Being Tasered By Police In Schertz, Texas (Exclusive Details)

Kelis Shares A Glimpse Of Her New Baby Girl (Photo)

Drake Responds To Grammys Snubbing Controversy: ‘I Think We Should Stop Allowing Ourselves To Be Shocked Every Year’

Fantasia Barrino And Her Husband Announce They’re Expecting A Baby On Instagram Live!