Roommates, Gayle King has been very open about the weight she has gained during quarantine and is committed to sharing her weight loss progress with her fans on social media. Well, apparently her weight loss methods are working and she just shared an update on social media revealing she’s almost 10 pounds down.

A little over a week after she initially documented that she had gained a significant amount of weight while in quarantine, Gayle King posted a positive update with her fans on Instagram.

She reported that she’s down to 165 lbs, which is a change from 172 lbs less than two weeks ago. Gayle revealed that her weight loss can be contributed to a soup fast. “Update! Just completed 5-day soup fast and the results are in!” she wrote.

She also stated that she’s striving to lose even more weight in order to fit into a specific dress while she co-anchors CBS’ 2020 election night coverage with fellow anchor Norah O’Donnell.

Gayle wrote, “Trying to get into mustard yellow dress for Elex night coverage TONITE…praying to sweet black baby Jesus it now fits, that you VOTE and that there is PEACE.”

Additionally, she also asked that her fans be kind regarding the comments about her feet, which she has admitted have been neglected since the quarantine because she doesn’t feel comfortable having a pedicure right now.

“Plz withhold all negative comments about my jacked-up feet I’m well aware they are a hot mess but not yet comfortable in a covid environment going to nail salon…” she posted, adding, “Bigger issues to worry about…” 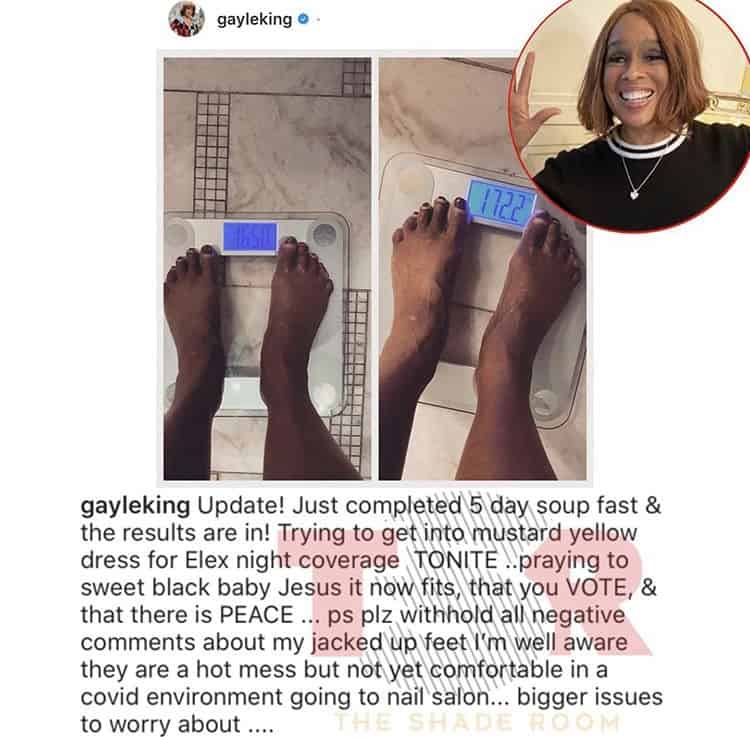 Rafaello & Co. Issues Apology To Lil Baby After Selling Him A Fake $400,000 Watch