When news broke of rapper A$AP Rocky being detained by Swedish authorities in reportedly “inhumane conditions” following a physical altercation with men while visiting the country, many celebrities used social media to spread the word about signing a petition to help free him. However, not everyone was on board, as many pointed out ASAP’s problematic past comments about #BlackLivesMatter and being black—specifically The Read’s Crissle West. Her comments caused Joe Budden to go at her via his weekly podcast…and it ain’t pretty.

Crissle initially hopped on Twitter to point out A$AP’s prior comments, writing this:

“I thought of this when I heard about A$AP Rocky’s situation in Sweden.”

She followed that up with a screenshot of his 2014 comments regarding his inability to relate to the #BlackLivesMatter movement, which read:

“They’re not forcing me to do s**t. I’m just gonna stay black and die. Why, because I’m black? So every time something happens because I’m black I gotta stand up? What the f**k am I, Al Sharpton now? I’m A$AP Rocky. I did not sign up to be no political activist. I wanna talk about my motherf**kin’ lean, my best friend dying, the girls that come in and out my life, the jiggy fashion I wear, my new inspirations in drugs! I don’t wanna talk about no f**king Ferguson ans s**t because I don’t live over there! I live in f**king SoHo and Beverly Hills. I can’t relate. I’m in the studio; I’m in these bitches’ drawers. I’m not doing anything outside of that. That’s my life.” 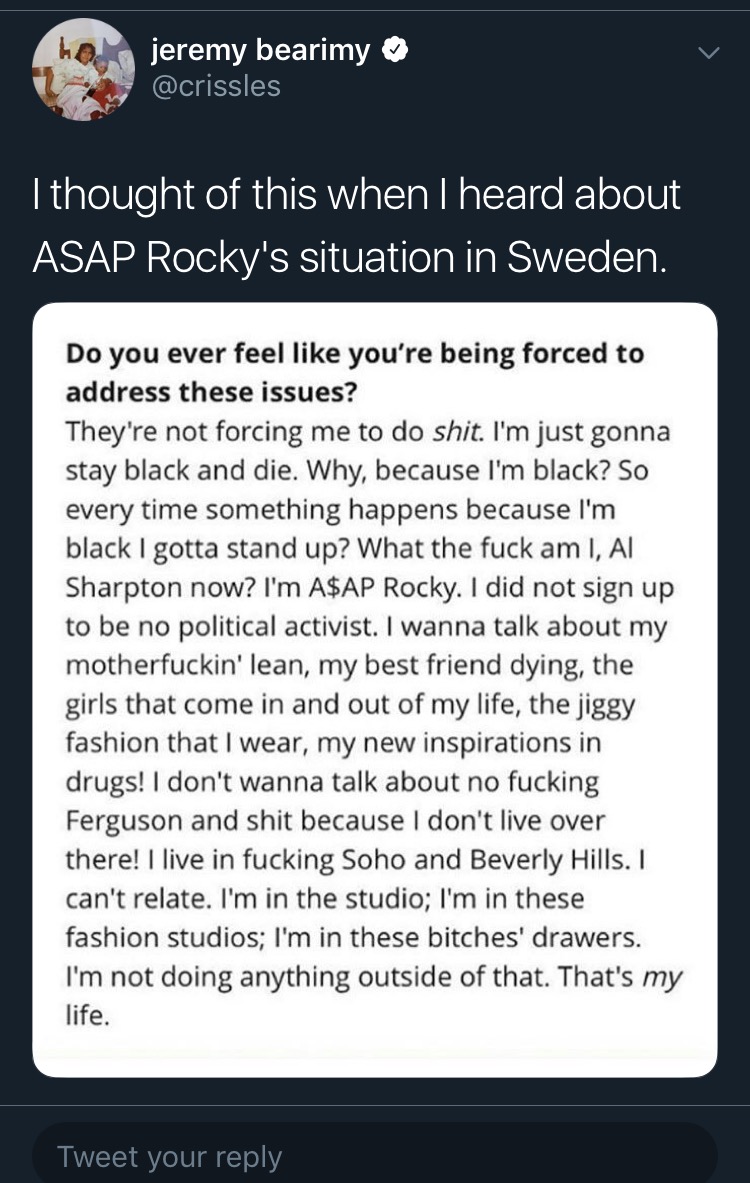 Crissle added to that post by clarifying that she’s not here for the #FreeA$AP movement:

“So yeah… As for me and my house we still buying that cheap shit at Ikea. Aint signing a petition either.” 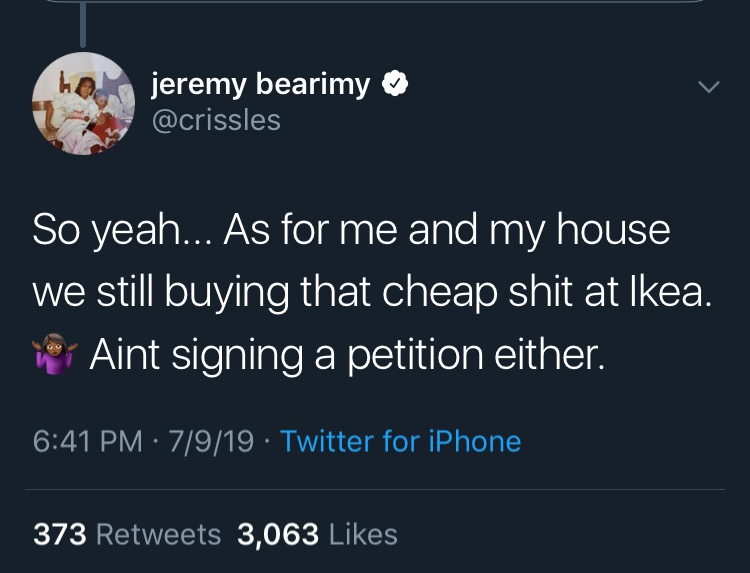 This is where Joe Budden enters the fray. On his weekly podcast, Joe decided to call out Crissle for her comments, saying that she was a hypocrite for claiming to be pro-black, but expressing such harsh feelings about A$AP.

“I don’t like that this is coming up now, I don’t think it adds anything to the narrative. Nor does it change how I feel. If it changes how you feel, then you should look inside your heart, he continued. He’s in a real f**ked up situation over there, how I feel about that is not altered by how he feels about anything. That’s so nasty on Twitter.”

“But that nasty a** bum ass homegirl, I seen her put it out. It’s just like, you n***as that be preaching this pro black s**t but get evil in a heartbeat…woo.”

Of course, Crissle caught wind of Joe’s comments and fired off a few tweets addressing him:

“Lmfaoooooo I know all about how budden’s b**ch a** is STEAM pressed over me and our show. N***a oughta be glad I paved the way for him. I am not talking about his goofy a** on my bigger, longer running, more money making, coming to TV this fall show. He can get these tweets though.” 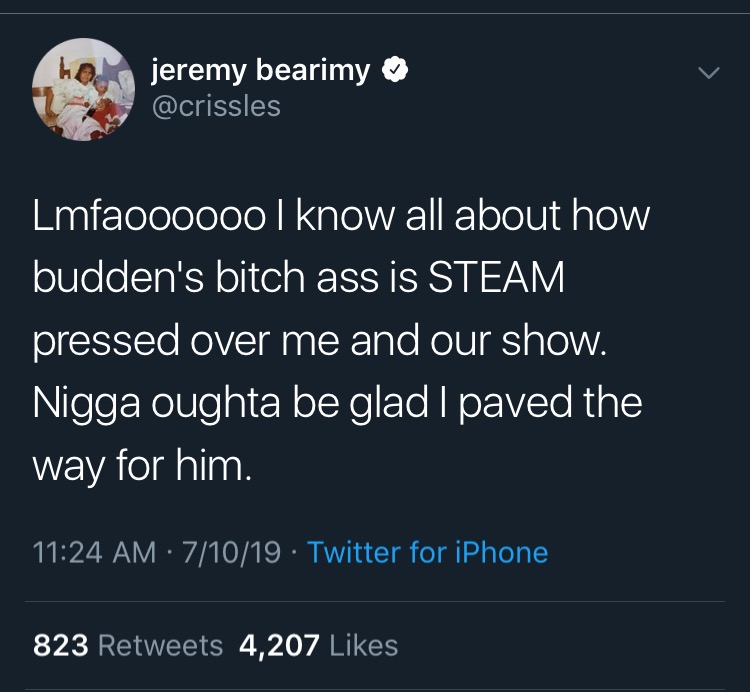 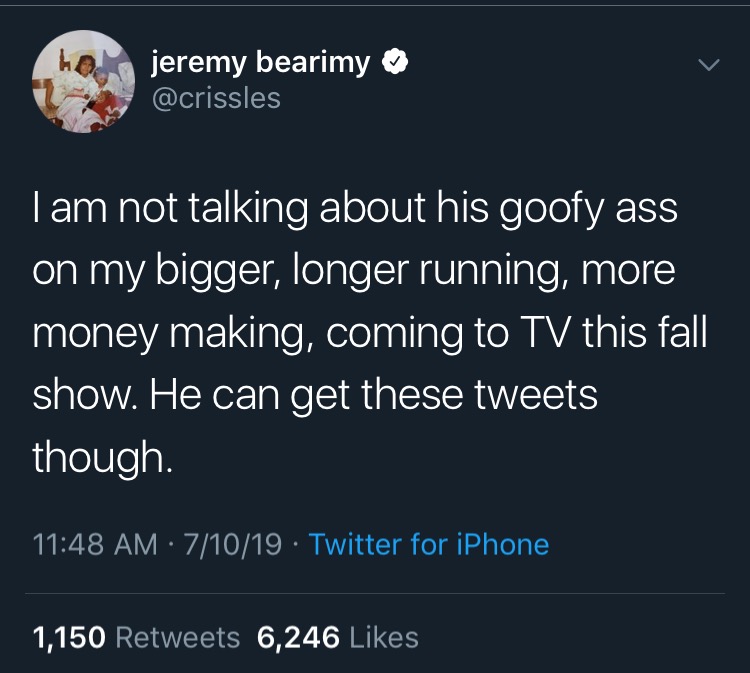 At press time, Joe hasn’t responded to Crissle calling him out, so we’ll have to wait and see what happens next.

Roommates, whose side are you on in this situation?