Roommates, KeKe Palmer was definitely not in the mood for fans hurling criticism her way regarding recent photos of her kissing her white boyfriend. KeKe clapped back in a major way and let everyone know that what they think of her romantic life is none of her concern.

Late last week, KeKe Palmer posted a video of herself kissing a mystery man with the caption, “Rare footage of me in the process of becoming randomly suspicious of someone I trust because I struggle with distinguishing reality from my crippling anxiety and emotional trauma.”

While the guy in the video wasn’t clearly identified, KeKe has been linked to Dutch rapper and singer Styn since last year—and he closely resembles the man in the video that she was kissing.

As expected, many of her fans were not happy about KeKe being in an interracial relationship when she advocates so publicly for Black people.

Fast forward to the present and she decided to post about the election, writing “I see a lot of people living one way but voted another.” This prompted a fan on Twitter to write, “Like you?”

That’s when KeKe replied and let the fan know she didn’t appreciate her comment. “Sorry sis. I’m not in the mood for pseudo shade rn lol,” she wrote.

“Oh it’s no shade at all love. I still rocks with you… but you kissing that colonizer etc just wasn’t the move in this time right now. But again if it’s not that than that’s on me I’m grown to admit that,” the fan replied.

However, KeKe shut it all down, posting “Lol I’m sad this was what you chose to tweet me about. Girlllll God bless” 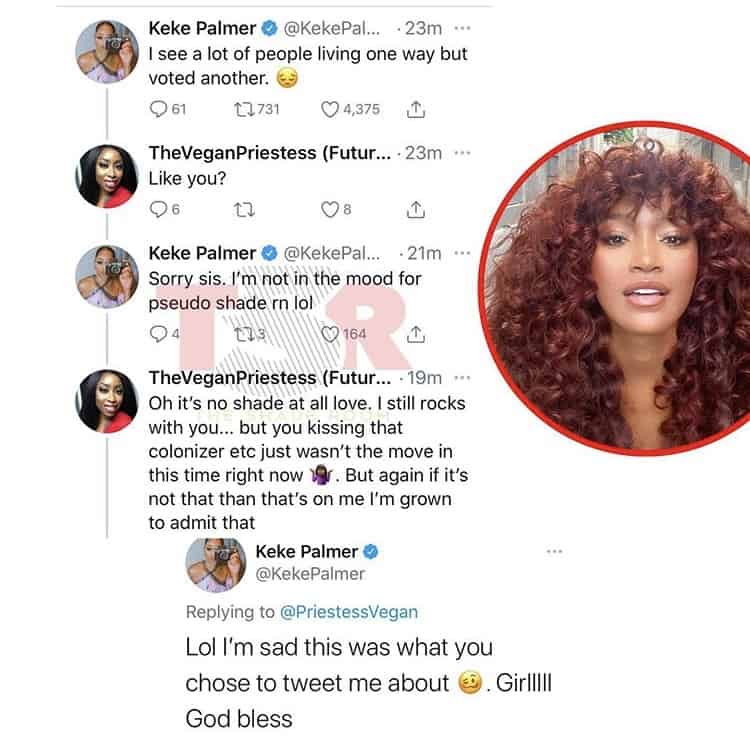 Kenya Barris Defends His Work Against Critiques Of ‘Perpetuating Colorism’: ‘I Challenge Anybody Who’s Had A Blacker Body Of Work Than Me’

UPDATE: Damar Hamlin Speaks Out For The First Time Via Video Since Suffering Cardiac Arrest Mid-Game