Kodak Black Calls Out Man For Recording Him
Celebs

Kodak Black Calls Out Man For Recording Him: “You Didn’t See What Happened To PnB Rock”

When it comes to Kodak Black, he’s okay with being posted online as long as he’s the one doing it. The Florida native recently had to check a man for recording him. Although Kodak Black was on Instagram live, and it was pitch black, the audio was loud and clear.

“Aye, check it out, man. Don’t record me, bro. What you are doing,” Kodak questioned. “You on Live, but you just put the phone to my car, homie. Don’t do that … You tripping, boy. Come on, homie. You are tripping. You don’t see that s**t that happened to PnB [Rock]? You don’t see that s**t that just happened to PnB Rock, homie? So why are you recording me? … God forbid some crazy s**t [happen]. Then what? Come on, man. You are tripping.”

Kodak has been vocal about the passing of PnB. In the wake of the Philly native’s death, Kodak wrote on Instagram, “Ion usually speak on deaths! Go to funerals or nuns because life goes on, but, SMH. PnB was my boy. I was just OTP with em last night!” Kodak wrote on his Instagram Story after getting news of the murder. “We be talking bout him coming back out & Poppin his shit again in this rap s**t.”

As we previously reported, the 30-year-old, whose real name is Rakim Allen, was shot to death at a Roscoe’s Chicken & Waffles in south Los Angeles on September 12th after his influencer girlfriend, Stephanie Sibounheuang posted a photo of a plate containing food. Many showered the ‘Selfish’ singer love, including Meek Mill and Nicki Minaj. The violence in Los Angeles continues to be a topic so Roddy Ricch, who is a native, shared a message on Instagram pleading with people to find a better way to pursue their dreams. 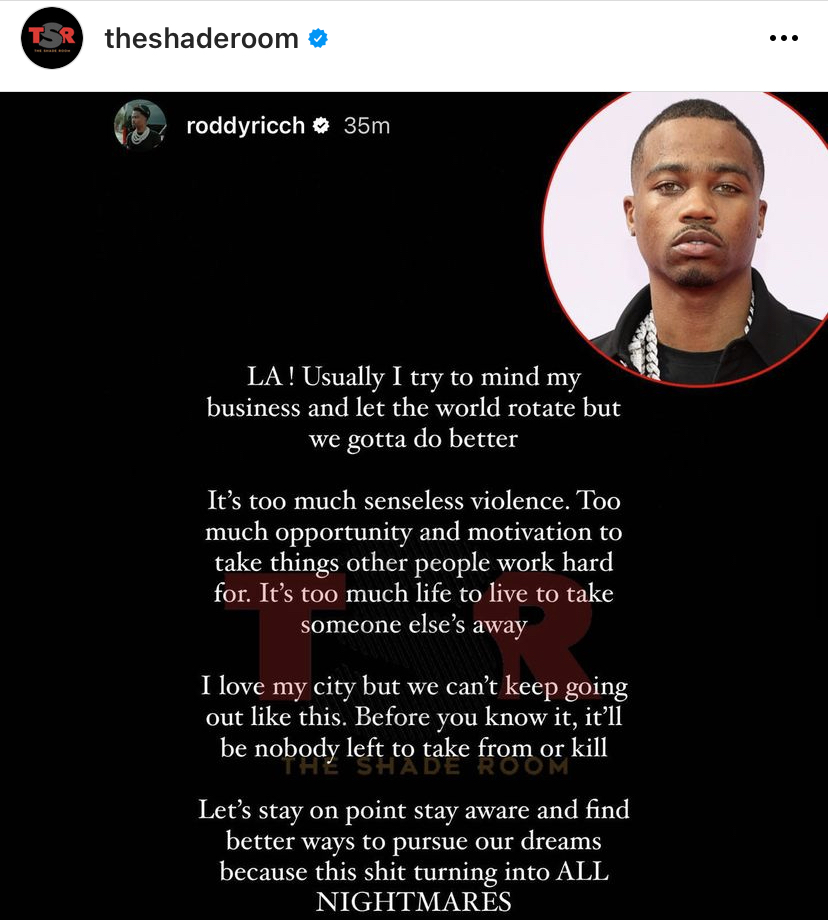 Our thoughts continued to go out to PnB Rock’s loved ones.

Celebrities Speak Out Following The News Of Coolio’s Passing

(Update) Trio Officially Charged In The Murder Of PnB Rock

Coolio Passes Away At The Age Of 59