"Slaying Is The Standard:" The Shade Room Got The Juice From Cutting It In The ATL's Maja Sly!
Celebs

“Slaying Is The Standard:” The Shade Room Got The Juice From Cutting It In The ATL’s Maja Sly! 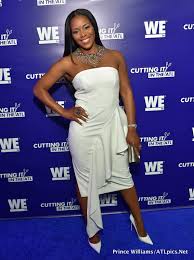 “Slaying Is The Standard:” The Shade Room Got The Juice From Cutting It In The ATL’s Maja Sly!

Hair has always been an important part of Maja Sly’s life. The mini-mogul told us that everyone in her family had long, thick hair except her, so, her hair stylist uncle began doing her weaves at the tender age of twelve. Fast forward to today, she has successfully garnered client lists at all 6 of her Walk-In Weave locations and has made over $1 million last year by running Walk-In-Weaves in conjunction with her Pretty Hair ventures.

Sly is definitely good at utilizing the platform that she has on Cutting It In The ATL as a way to not only promote her businesses, but also to be an example for many young girls who look up to her! During our interview with Maya the Weave Slayer, she gave us some insight on the reason behind her not joining the cast of Real Housewives of Atlanta, how she got started with Walk-In Weaves as well as whether or not she’s interested in working with her fellow ‘Cutting It’ cast members.

When Maja was approached to be a member of The Real Housewives of Atlanta, she was all for it! I mean, who wouldn’t want to be on one of the hottest tv franchises on the planet, right?! Well, all that glitters isn’t always gold, and the tea is that when Maja had told her husband that she wanted to do RHOA, he told her no! Considering that she’s a boss with a sickening weave and a Million Dollar Business, it would be a very good look for a fresh black female entrepreneur to showcase all that comes along with owning a business in Atlanta. TSR Industry Plug, B. Young posed an excellent question asking Maja, “When was the last time you’ve seen black entrepreneurs on tv like Phaedra and Kandi that also look like us?” The Minister of Weaves responded by saying that because she had grown up watching shows like The Cosby Show, “…I wasn’t gonna be an out-of-wedlock mother, I wasn’t going to not go to college, because I saw that on tv and knew that I could have that too! That’s why I married a doctor!”

Well, fortunately, but unfortunately, Maja is now divorced, but if she would have accepted the job over at Bravo, then all of the messy stuff would have been on tv and ultimately would have tarnished her brand. Bravo, Maja was the best thing y’all never had! She truly dodged a bullet (yes, we’re Bey stans over here!!). In addition, it was through her divorce that Maja continued to grind even harder! She found that she needed something to help her through her life at the time and Walk-In Weaves served that purpose for her. Not only did it allow her time to fill those pockets, but it allowed her to center her focus back on herself. Maja can thank her now ex-husband for the success that she’s currently enjoying! *sips tea*

As a child, Maja noticed that out of all of the females in her family, she was the only one that did not have super long and thick hair! Her hair stylist uncle would do her hair at the request that she continued to study and get good grades and, of course, she did! Some of y’all may be pleasantly surprised to know that Maja has a degree in finance from Alabama A&M and the Broker and Owner of The Pinnacle Division which has over $50 million in real estate sales to her credit! The businesswoman came from humble beginnings, growing up in a trailer park with a mother who struggled with an addiction and was subsequently raised by her grandmother. Not being close with her mother, she says, formed her into the self-sufficient and head strong woman that she is today which has allowed her to be able to make decisions and to have the luxury of not having to answer to anybody! Now that is a boss! #ItsNotJustAHashtag (TSR insider ;-D )

Whether or not Cutting It In The ATL gets a season 2, Maja has still come out on top and we expect to see her brand expand all over the globe! “At the end of this, I can franchise my stores, set up pop-up shops and really grow my business!” Maja is set to begin a country-wide tour of Pretty Hair pop-up shops (prettyhairnow.com)next week which is designed to provide competitive pricing for different hair markets in cities like LA, Oakland, Dallas and even Miami. The business model is designed so that stylists can become their own bosses and make $100,000 per year or more, so keep your eyes and ears open for the opportunity or check out her Instagram here!

Make sure that you tune into Cutting It In The ATL Thursday at 10pm!

Keke Palmer Humorously Recalls Finding Out She Was Pregnant

Tiffany Haddish Is Ready To Film ‘Girls Trip 2’: ‘I Can’t Be Concerned About What People Think’

Usain Bolt On Fired Business Manager And Missing $12.7 MILLION: ‘It’s Put A Damper On Me’