Roommates, following the announcement of the 2020 Grammy awards, for which she didn’t receive a single nomination, Teyana Taylor appears to have some sad news regarding the future of her music career. In a post on social media, Teyana alluded that she has decided to retire from singing due to feeling under-appreciated in the music industry.

While posting her Spotify streaming stats for the year, Teyana Taylor likely broke her fans hearts, when she practically announced her official retirement from music.

She wrote the following lengthy caption:

“I ain’t gone front in times of feeling super under-appreciated as a artist, receiving little to no real push from the machine, constantly getting the shorter end of the stick, being overlooked, I mean the list on and on lol…So I’m retiring this chapter of my story with the comfort that i can depart with peace of mind seeing that all the hard work & passion put was indeed loved & supported somewhere in the world.”

Teyana added, “To all my supporters from day 1 & all my new ones I love you and I thank you for everything & don’t worry y’all know. All hustlers have the understanding that when one door closes another will open…either that or I’m pickin da locks petunia!!! So wassup.”

She previously voiced her extreme disappointment at not receiving any Grammy nominations and suggested that the voting members were being sexist, as many of the R&B categories featured only men. 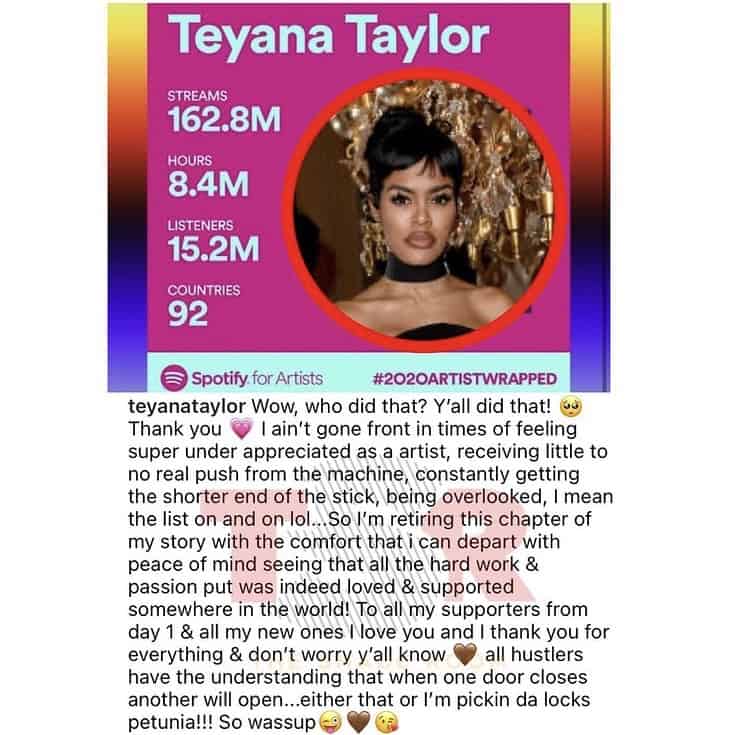 Kodak Black Explains Viral Video Of Him Dancing With His Mother: “I Try To Make Her Feel Real Beautiful”

Boosie Uses Homophobic Slurs, Tells Lil Nas X To Kill Himself In Response To Lil Nas Joking About Them Collaborating