The OMG Girlz were absolute trendsetters back in the group’s heyday circa 2012. The Atlanta-based teens dazzled the music industry with their unique style, talent, and hits like “Gucci This” and “Baddie.” Now we can exclusively confirm the story behind how the talented trio inspired Beyoncé, too!

The Shade Room Teens’ director of social media, Taylor Bickham, chopped it up exclusively with Bahja Rodriguez, Zonnique Pullins, and Breaunna Womack as the friends recall the day Beyonce thanked them for being the inspiration behind her first Instagram moniker, “Baddie Bey.” In case you missed it, the group’s song “Baddie” debuted in 2012 with the purple, pink and blue-haired teenagers coining the phrase in a song.

Breaunna, however, gives credit to notable dance choreographer Sean Bankhead who called his dancers “baddies” in early 2010s youtube videos. She says the group simply brought it to the main stream and used the phrase often during interviews — even calling Bey a “baddie” as they did a west coast radio run.

Remember when Beyoncé first joined Instagram as “baddiebey” lol, man that was such a great time! 👑🐝 pic.twitter.com/tR0MD9rs5I

Bahja, 25, added that they took the phrase “baddie” and made it popular with their song and during the promo tour, which Beyonce paid attention to.

“We brought ‘baddie’ to the forefront. Beyonce said it herself. She wrote us a letter…her Instagram name was Baddie Bey because that’s what we was calling her. With Beyonce, it was totally unexpected but I know that all of us were SHOOK.”

27-year-old Breaunna recalled the moment that Bey acknowledged them for inspiring her IG name with a handwritten note. Beyonce wrote the note with marker — something they felt was thoughtful and left them speechless.

“I remember we was at the cabin and we got the call — the letter she sent our manager.”

Beyonce even signed the letter as “Baddie B.” 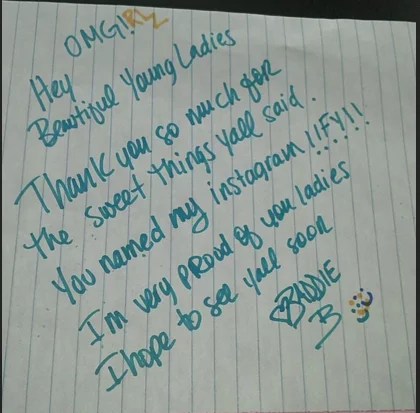 How sweet! Roomies. did you realize The OMG Girlz inspired BEYONCE?!