Roommates, 2020 has been a rollercoaster ride of a year for Tory Lanez, who started with the massive success of his social media show “Quarantine Radio”—and ended with him officially charged in the shooting of Megan Thee Stallion. However, as many fans now claim that Tory is “cancelled” due to his alleged role in the shooting, he’s stating otherwise following the release of his 2020 streaming numbers.

Cancel culture is a very big thing these days and it seems that whether the incident is small or large, celebrities find themselves getting cancelled left and right. Tory Lanez is one of the celebrities that was allegedly cancelled in a major way following the summer shooting of Megan Thee Stallion, in which he is currently charged.

Well now that the year has come to an end, many streaming services are releasing the streaming numbers of artists—and according to Tory, all the talk of him being cancelled, is just that…talk.

He posted a message to those who claim he’s cancelled, writing:

“Lmao some of y’all going thru your minutes on playlist and realizing u didn’t really cancel s**t ….. love u too. Can’t believe u even tried to play with us like this.”

As we previously reported, Tory Lanez pled not guilty the counts of felony assault with a semiautomatic firearm, personal use of a firearm, and carrying a loaded, unregistered firearm in a vehicle. If convicted, he is facing a maximum state prison sentence of 22 years and eight months. 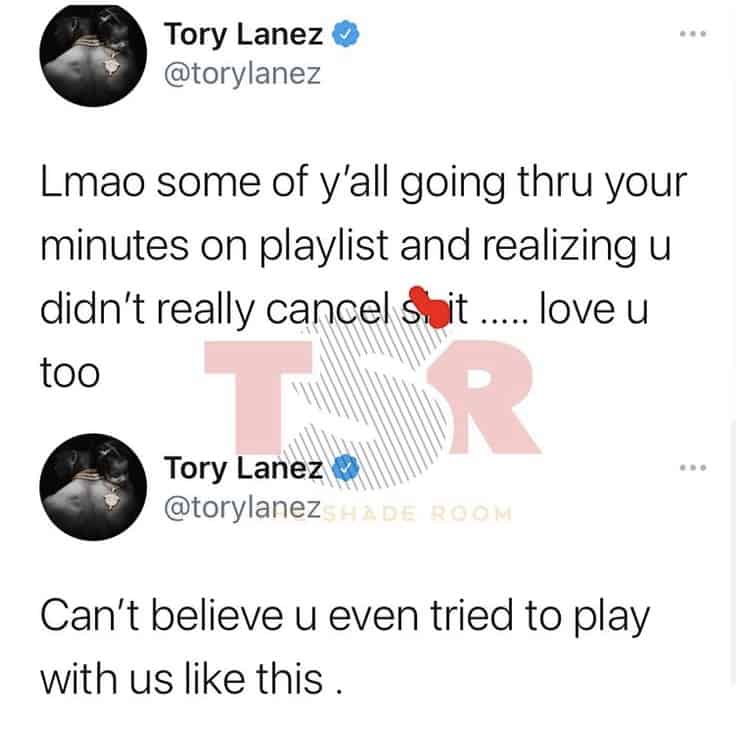