Fetty Wap Brags About His Musical “Greatness” In Instagram Post—“Who’s Better Than Fetty?”

Roommates, on the heels of releasing new music, Fetty Wap decided to get on social media and let everyone know just how “gifted” he is. In a post on his Instagram stories, Fetty Wap was definitely feeling himself and wanted to let his fans know that he’s the best in the music game.

Although he’s been gone from the music industry, Fetty Wap is officially back with a new mixtape titled “You Know The Vibes,”—which is likely why he wanted to let his fans and haters know that when it comes to the music, he is unmatched.

He wrote the following message about his musical ability:

“…Read this and laugh all ya’ll want n***as know I’m gifted…can’t deny greatness to long and I’m putting the pressure on this time…Melodically Who’s better than Fetty…I’ll wait.” 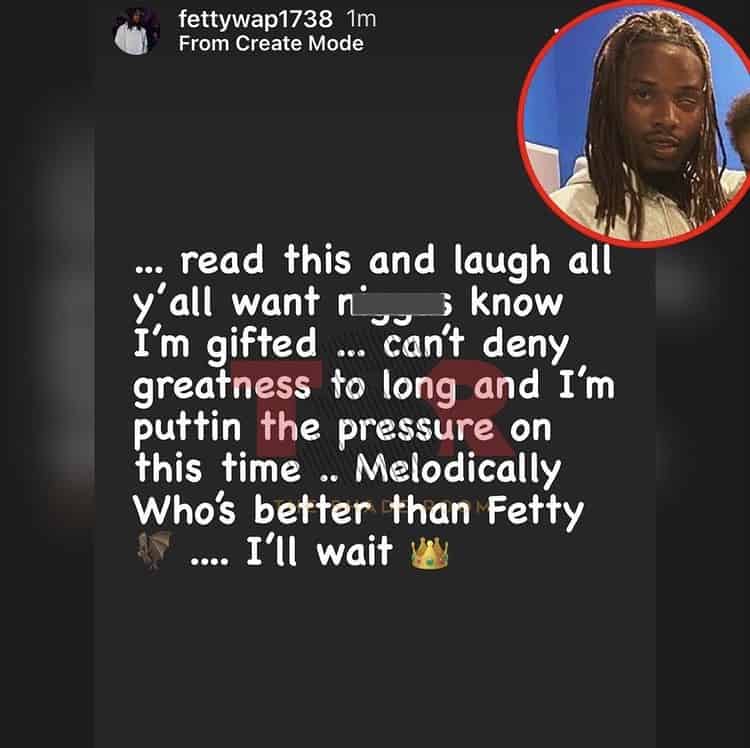 Meanwhile, as we previously reported, Fetty Wap is currently right in the middle of the latest beef between the mother of his daughter, Masika Kalysha and Alexis Skyy, the rumored mother of his other daughter.

A new issue between the two ladies has recently surfaced. Alexis recently posted a photo of her and her daughter and underneath the photo, her ex-boyfriend Brandon Medford wrote, “Daddy’s girl.” This sent fans (and Masika) into a tailspin, as it appeared that the answer to the question of who fathered Alexis’ daughter was finally answered.

Once the photo began to circulate on social media, Masika took to her Twitter account and wrote the following:

“Find my comment from 2 years ago on the shade room and don’t ever fkn question me again. Foh”

The comment that Masika is referring to is when she wrote that Alexis should go “swab” Brandon for a paternity test. Getting wind of Masika’s comments, Alexis posted a simple message on her Instagram stories. “Ya’ll Big Mad at Big Lex this morning,” she wrote.

As of right now, Alexis has yet to confirm who the actual father of her daughter is.

Walmart Planning To Create Their Own Cryptocurrency