Tory Lanez‘s criminal trial for the 2020 shooting of Megan Thee Stallion continues, with Meg’s former friend and assistant Kelsey Harris back on the stand for cross-examination, which saw her backtrack on a number of things.

On Thursday, Deputy District Attorney Kathy Ta continued her questioning of Harris, starting with “What happened between September and today that you forgot everything?,” in reference to a September interview where Harris gave several details corroborating Meg’s story that Lanez had shot her, Law & Crime’s Meghann Cuniff reports.

Harris, whose first-person account had been long-awaited, testified that “some things” were true in that video, but not all of it.

She then repeated she had forgotten much of what she originally stated due to her anxiety, along with postpartum depression and a recent death in the family, of which she noted the first time she took the stand on Wednesday.

That morning, Harris blindsided prosecutors when she immediately and repeatedly invoked her fifth amendment and requested to “use immunity,” which was granted, however she remained mostly unresponsive to the prosecutors’ questioning related to the shooting.

On Thursday, Ta began questioning by asking Harris about her being granted immunity for her testimony, while noting that immunity doesn’t cover perjury (lying on the stand), of which the defense team similarly warned at the beginning of the cross-examination, according to Variety.

Ta then asked Harris if Megan – whose real name is Megan Pete – was shot that night during a roadside assault in July 2020, to which Harris testified “her team told me she stepped on glass.”

Harris told Ta that she wasn’t sure who shot Meg, and added that the Houston-born rapper “needs to be held accountable for spreading false information.”

Harris told the defense during cross-examination that she “would like to make that very clear” that Lanez – who’s real name is Daystar Peterson – did not pay or bribe her before the start of the trial, the outlet reports.

Pete had previously alleged Lanez offered her “a million dollars” to not tell authorities that he had shot her, which Harris alluded to as well during her testimony on Wednesday, The Shade Room reported.

Thursday’s morning court session also included rulings from Judge Herriford, who ruled the defense can call the LAPD detective on the case to question why he didn’t pursue Harris as the possible shooting.

Harris Again Denies Claims She Shot Meg, While Judge Rules Prosecutors Can Use Her Texts As Evidence

Judge Herriford went on to rule that prosecutors could use Harris’ texts, including one sent to Meg’s security guards, “Help,’’ “Tory shot meg,” and “911,” plus another which Harris had sent to Meg, as evidence.

“Should I get a scan at urgent care? My chest is hurting… my left side, back and neck hurt, but that’s from the fighting and him dragging me out of the car by my hair.”

Meanwhile, the defense attempted to block that ruling, calling it “late discovery,” however prosecutors said it was “critical” considering Kelsey has since backtracked on statements she made back in September.

Harris again denied claims that she was the one who shot Meg, speculation that had been heavily implied by Lanez’s defense attorneys, who argued his DNA was never found on the gun used in the attack but Harris’ DNA was.

On Wednesday, Harris told the court that those allegations were “ridiculous.” 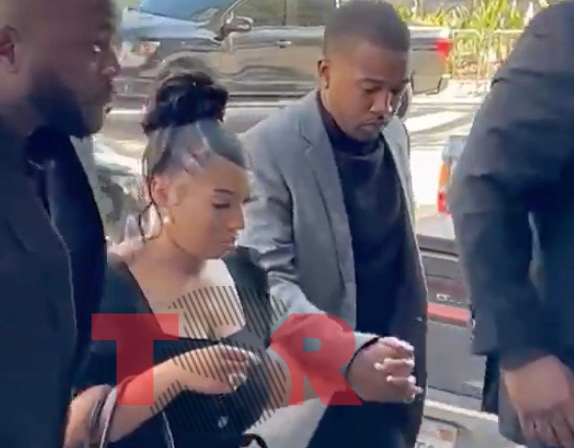 Harris Testifies Most Of The Night Was “Blurry,” While Jury Hears From Surgeon Who Operated On Meg

The jury also heard from Dr. Lee Haruno, the surgeon who operated on Meg’s foot the night she was shot. Dr. Haruno displayed several X-rays showing four metallic bullet pieces in her feet, while testifying that they had removed the fragments they could during emergency surgery the night of the shooting.

Harris repeatedly testified that most of that night is “blurry” due to the group drinking at Kylie Jenner’s home before the shooting, Variety reports.

“Kelsey, I understand it was alcohol,” Lanez’s attorney, George Mgdesyan, said during cross-examination on Thursday, before asking if there had been a physical fight between her and Meg. “We probably just like bumped into each other,” Harris replied.

Meanwhile, Judge Herriford ruled that the prosecution is allowed to play the entire 80 minutes of Harris’s September interview in court, which is expected to occur on Friday – day five of Lanez’s trial, according to Los Angeles Times reporter James Queally.

(WATCH) Offset Responds To J. Prince Sending Podcast Warning: ‘How Dare One Of Y’all…Speak On Me And Take’