Trump Demands Another Recount After Georgia Officially Certifies The Votes Of The Hand Recount, Declaring Joe Biden The Winner A Second Time

Roommates, despite the recent Georgia recount officially being completed and certified—Donald Trump has now requested another formal recount regarding to 2020 presidential election where Joe Biden was declared president-elect. This would be the second recount and third vote tabulation overall following the November 3rd presidential election where Joe Biden topped Donald Trump to become the new POTUS.

Georgia’s latest recount results showed Biden beating Trump by 12,670 votes out of about 5 million cast, or 0.25%. State law allows a candidate to request a recount if the margin is less than 0.5%. Republican Governor Brian Kemp formalized the state’s slate of 16 presidential electors. The Trump campaign sent a hand-delivered letter to Georgia Secretary of State Brad Raffensperger’s  office requesting the recount in an election that has been continuously populated with unfounded accusations of fraud by Trump and his supporters.

“Today, the Trump campaign filed a petition for recount in Georgia. We are focused on ensuring that every aspect of Georgia State Law and the U.S. Constitution are followed so that every legal vote is counted. President Trump and his campaign continue to insist on an honest recount in Georgia, which has to include signature matching and other vital safeguards.”

Late last week, in certifying the state’s electors, Kemp brought up concerns about signatures—however, fellow Republican Raffensperger has reiterated confidence in the results, and recently said that “Georgia’s voting system has never been more secure or trustworthy.” 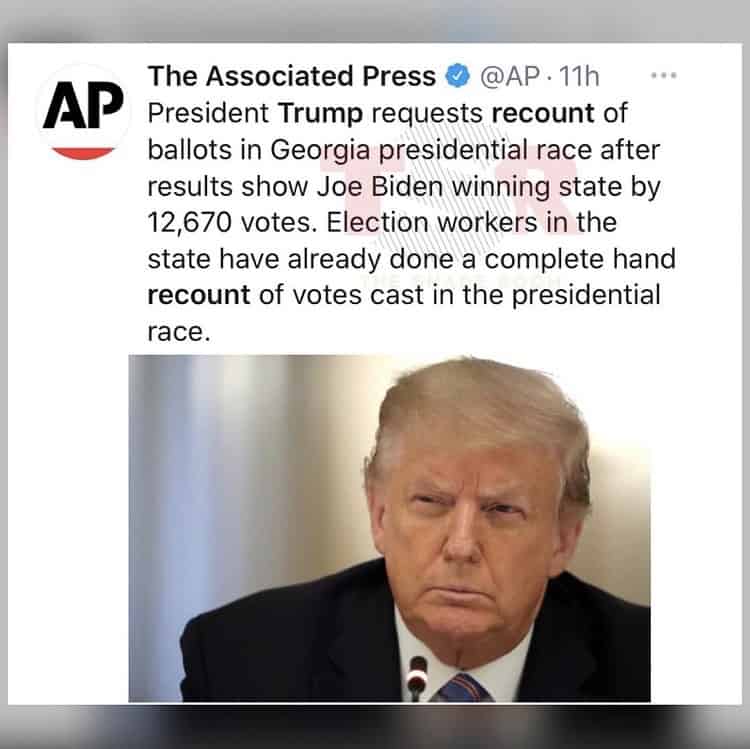