Roommates, the 2020 presidential election was over two weeks ago with Joe Biden officially declared the new president-elect—but despite his overwhelming loss, Donald Trump continues to refuse to concede. A recent report reveals that Trump has allegedly told inside sources that although he knows he loss the election, he will continue to prolong conceding because he wants to get back at the Democrats.

Donald Trump reportedly told an ally that he knows he lost, but that he is delaying the transition process to Joe Biden and is aggressively trying to sow doubt about the election results in order to get back at Democrats for questioning the legitimacy of his own election in 2016, specifically regarding the Russia investigation of fraudulent votes on his behalf.

Trump’s refusal to concede, stems in part from his perceived grievance that Hillary Clinton and former President Barack Obama undermined his own presidency by saying Russia interfered in the 2016 election and could have impacted the outcome.

He continues to hold a grudge against those who he claims undercut his election by pointing to Russian interference efforts, and he has suggested it is fair game to not recognize Joe Biden as the President-elect, even though Clinton conceded on election night in 2016 and the Trump transition was able to begin immediately.

Trump is also continuing to process the emotional scars of losing to a candidate he repeatedly said during the campaign was an unworthy opponent whose win would amount to humiliation. 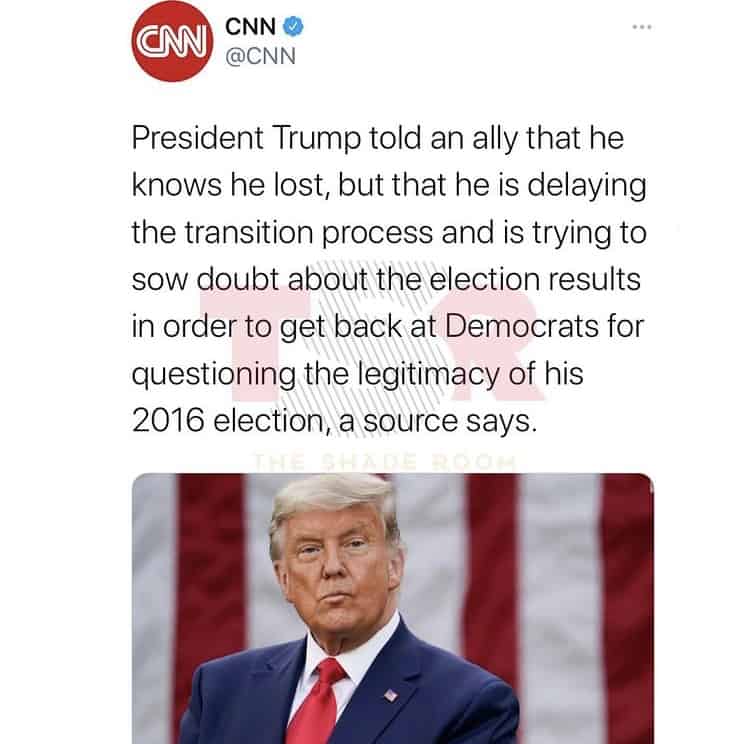 Michael B. Jordan & Lori Harvey Were Livin’ It Up While Vacationing In St. Barts Together! (Exclusive Photos)

Lori Harvey & Michael B. Jordan Continue To Flaunt Their New Romance—She Let’s Everyone Know He’s “Mine”

DaniLeigh Apologizes For ‘Yellowbone’ Song: “I’m Sorry I wasn’t Sensitive To The Topic”

Steve Harvey Reacts To His Daughter Lori Harvey’s Relationship With Michael B. Jordan