When it comes to helping those in need, YK Osiris is doing just that. According to TMZ, the Jacksonville, FL native has also offered to assist the family of 14-year-old Tyre Sampson in covering the remaining amount in funeral costs. If you recall, on March 26th, YK took to his Instagram story, writing, “If anybody knows his family, tell them to DM me because I want to pay for his funeral cost.” 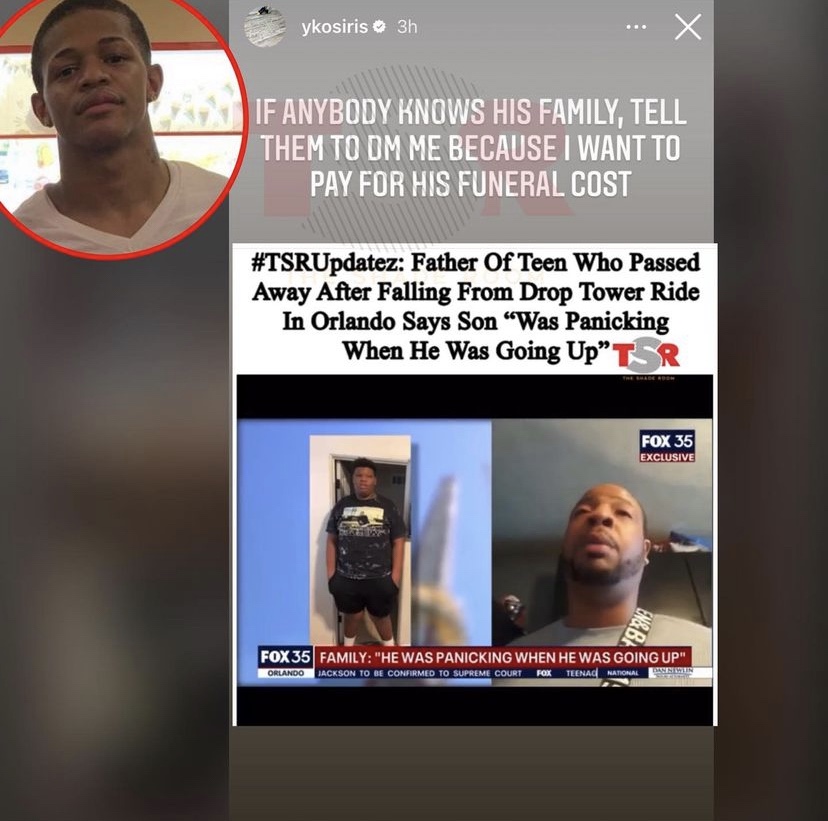 YK tells us exclusively that he has been in conversation with the Sampson family for two weeks. YK explains he’s been in contact with a friend of the Sampson family, Kelly Lekia-Ross. Kelly and her husband were the ones who brought Tyre to the theme park, where he tragically lost his life. We asked YK if the funeral had already been paid for? “She (Kelly) said the final bill will be sent today. NOBODY has paid yet, as I was told. They’re trying to have his funeral this weekend that I will be attending,” the singer advised.

YK isn’t the only one who has offered to help pay for Tyre’s funeral. As we previously reported, TikTok stars D & Z family reportedly also spoke with the family to assist with payment. As more information is provided, all eyes continue to be on the Sampson family. Today, WESH 2 reported that the family and their legal team, attorneys Benjamin Crump and Michael Haggard inspected the deadly free-fall ride.

During the investigation, they spent hours reviewing operations and maintenance manuals. In addition to examining the main and remote operating equipment, collection of warning lights, and the seat where Tyre was sitting the night of his death. Attorney Crump said, “Other than George Floyd’s tragic torture video, I think this is the worst tragedy captured on video that I have ever seen.”

Our thoughts continue to go out to Tyre’s entire family.